Work as a particle physicist

LIGHT YIELD OF UNDOPED CSI COUPLED TO PMT AT 77K

Thulium doped cesium iodide, CsI(Tl) in short, is widely used as scintillation detectors. The KIMS dark matter experiment has reached a light yield of 5 photoelectrons/keV (PE/keV) using it. My group conducted an experiment with an undoped CsI crystal. It was cooled down to liquid nitrogen temperature and directly coupled to a photomultiplier tube (PMT) that worked at that low temperature. The experimental setup is shown in the following schematic drawing. 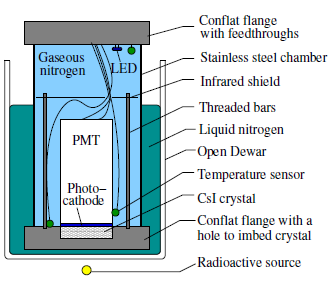 The first thing we measured was the single PE response of the PMT as shown in the following plots. The left plot shows 70 digitized electronic pulses recorded by the PMT. Some of them contained single PE pulses. The right plot shows the distribution of number of PE. The mean of the second peak is used to convert (ADC counts x ns) to number of PE, which was obtained by Gaussian fitting.

The system was then exposed to various radioactive sources to find out the relationship between the number of PE and the energy in the unit of keV. The energy spectra is shown below.

The light yields at room and liquid nitrogen temperature are shown in the top figures.

Most of the plots were created using ROOT. The manuscript was written in Overleaf.

Activities mentions in this site have been supported by the following grants: