Learn from a particle physicist 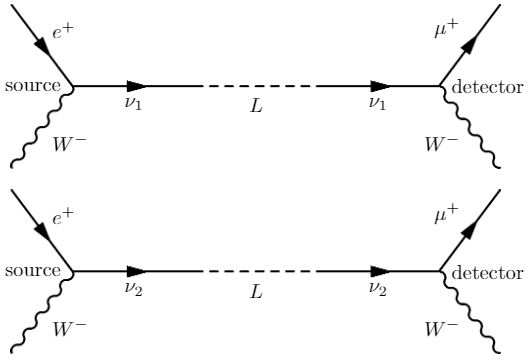 The following explanation of neutrino oscillation is often heard:

A flavor of neutrino, say νe, created in a neutrino source can oscillate to other flavors, say νμ, on its way to a detector, where it is converted to a lepton, μ, and detected.

Such an explanation can be illustrated as

The problem of this explanation is that it sounds like one neutrino is split to several traveling with different speeds and masses.

A better understanding is pictured in the top drawing. One of the neutrinos with definite masses is created from a weak interaction on the source side with certain possibilities. NOTHING HAPPENS ON THE WAY. It reaches the detector side without any oscillation and is converted to a flavor of lepton with certain possibilities. There is no oscillation, really. The flavor of leptons involved may change, but it happens at the two ends rather than on the way. Or more precisely, we should consider the neutrino generation, propagation and detection as a whole quantum process - the imaginary neutrinos with fixed flavors are used to artificially isolate all quantum effect to the propagation part of the process.

To sum up, neutrino oscillation is just a mathematical way to write down the possibility of flavor changes in the process. νe,μ,τ are not really particles; ν1,2,3 are the real ones, and they do not oscillate when propagate.

Activities mentions in this site have been supported by the following grants: